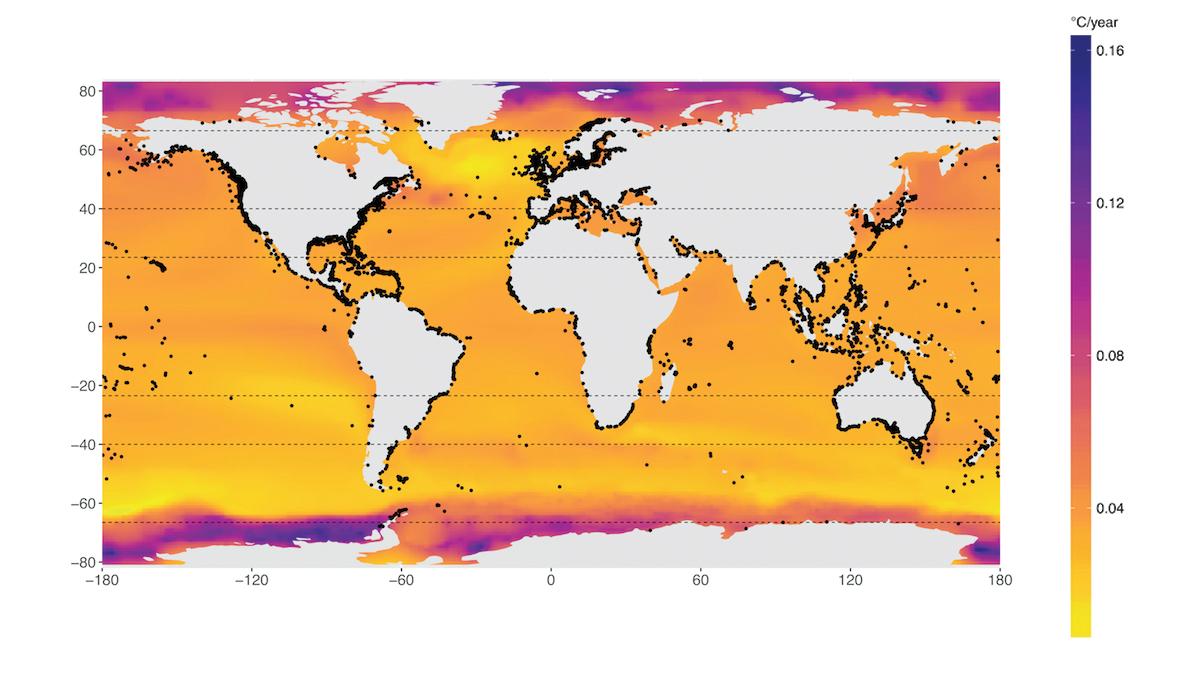 (Chapel Hill, N.C.— May 7, 2018) – New research from the University of North Carolina at Chapel Hill and collaborators found that most marine life in marine protected areas will not be able to tolerate warming ocean temperatures caused by greenhouse gas emissions. Marine protected areas have been established as a haven to protect threatened marine life, like polar bears, penguins and coral reefs, from the effects of fishing and other activities like mineral and oil extraction. The study found that with continued “business-as-usual” emissions, the protections currently in place won’t matter, because by 2100, warming and reduced oxygen concentration will make marine protected areas uninhabitable by most species currently residing in those areas.

The study, published today in Nature Climate Change, predicts that under the Intergovernmental Panel on Climate Change’s Representative Concentration Pathway 8.5 emissions scenario, better known as the “business as usual scenario,” marine protected areas will warm by 2.8 degrees Celsius (or 5 degrees Fahrenheit) by 2100.

The study concludes that such rapid and extreme warming would devastate the species and ecosystems currently located in marine protected areas. This could lead to extinctions of some of the world’s most unique animals, loss of biodiversity, and changes in ocean food-webs. It could also have considerable negative impacts on the productivity of fisheries and on tourism revenue. Many of these marine species exist as small populations with low genetic diversity that are vulnerable to environmental change and unlikely to adapt to ocean warming.

The study also estimated the year in which marine protected areas in different ecoregions would cross critical thresholds beyond which most species wouldn’t be able to tolerate the change. For many areas in the tropics, this will happen as soon as the mid-21st century.

“With warming of this magnitude, we expect to lose many, if not most, animal species from marine protected areas by the turn of the century,” said John Bruno, lead author, marine ecologist, and biology professor in the College of Arts and Sciences at UNC-Chapel Hill. “To avoid the worst outcomes, we need to immediately adopt an emission reduction scenario in which emissions peak within the next two decades and then decrease very significantly, replacing fossil fuels with cleaner energy sources like solar and wind.”

“There has been a lot of talk about establishing marine reserves to buy time while we figure out how to confront climate change,” said Rich Aronson, ocean scientist at Florida Institute of Technology and a researcher on the study. “We’re out of time, and the fact is we already know what to do: We have to control greenhouse gas emissions.”

The research was conducted in collaboration with researchers at Florida Institute of Technology, Polar Bears International, University of Southampton, Memorial University of Newfoundland, Marine Conservation Institute, NOAA Atlantic Oceanographic and Meteorological Laboratory, University of Miami and the National Oceanography Centre.

Bruno is available for interviews. Please let us know if you’d like to arrange a time to learn more.