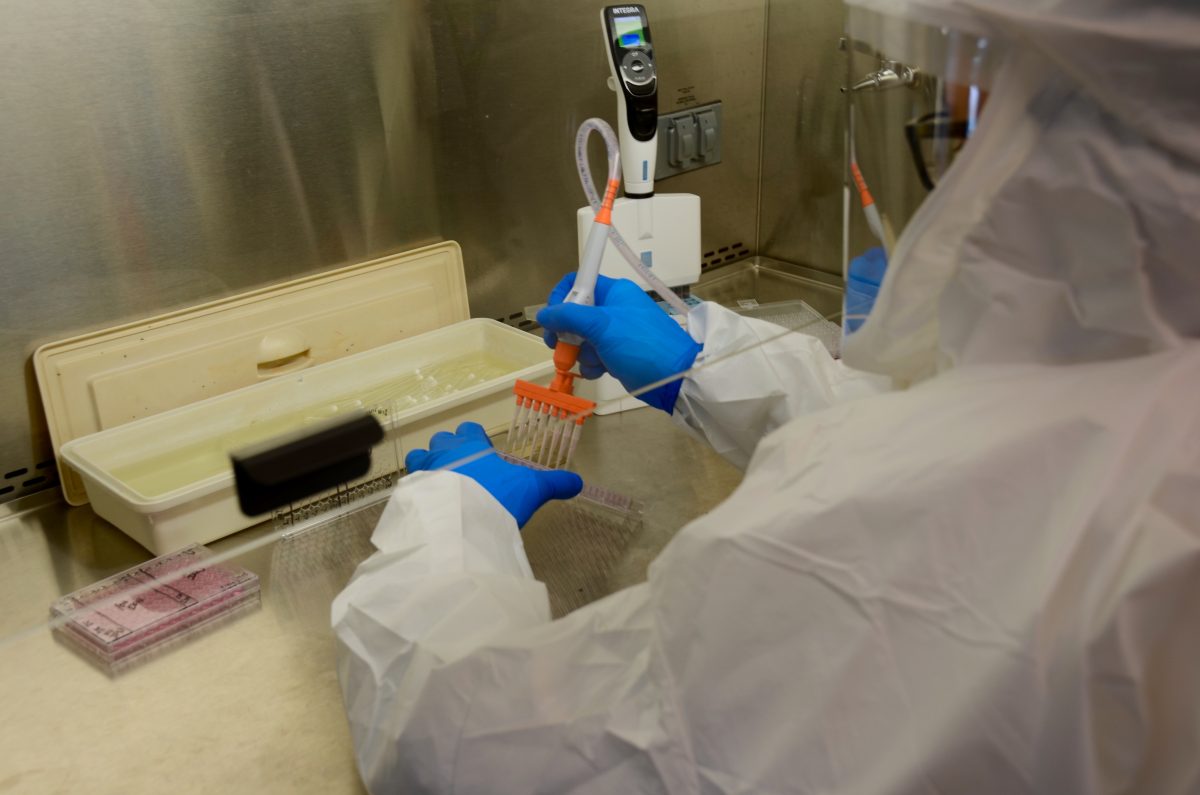 (Chapel Hill, N.C. – June 18, 2019) – Researchers at the University of North Carolina at Chapel Hill Gillings School of Global Public Health and their colleagues at the University of Texas at Austin and the National Institutes of Health Vaccine Research Center have discovered an antibody that broadly inhibits multiple strains of pandemic norovirus, a major step forward in the development of an effective vaccine for the dreaded stomach virus.

The study, published in the June 18 issue of Immunity, describes for the first time the structure of the binding interaction between the virus and a human antibody that may work against many strains of the pandemic ‘stomach bug.’

Research specialist Lisa Lindesmith and professor Ralph Baric, both of The Gillings School’s department of epidemiology, are co-authors on the study.

Human noroviruses are the leading cause of acute gastroenteritis, inflammation of the stomach and intestines. It accounts for nearly one in five cases of diarrhea and vomiting, and is responsible for an estimated 200,000 deaths per year, mostly in infants, children and the elderly, according to the Centers for Disease Control and Prevention. Though there are more than 30 known genotypes of human norovirus, nearly 60% of outbreaks are caused by GII.4 genotype strains that have caused periodic human pandemics since 1996 through today, the authors wrote.

“In order to design an effective vaccine for norovirus, scientists needed to identify a neutralizing antibody that could work against many strains of the virus, as well as strains that will circulate in the future,” said Baric. “This information can now be used to build better human vaccines.”

Highly conserved regions are parts of the virus that do not change. A human antibody that can target these highly conserved areas will provide broad protection for a prolonged period of time. With this knowledge, vaccine developers will have a better understanding of how, and how often, to reformulate the vaccine over time.

The technology, developed by co-author George Georgiou, was used to discover the key antibody in the study and the approach is applicable to a variety of highly variable bacteria and viruses.

“This study addresses a fundamental problem in norovirus disease development that could have wide-ranging impact on global health,” says Lindesmith. “We’ve established an understanding of the virus and how it changes, how the body’s immune response targets it and how we can use that information to make a better vaccine.”

The paper’s authors partnered with Takeda Vaccines, a leading vaccine manufacturer, which is in phase 2b of clinical trials with a human norovirus vaccine. Other key authors who collaborated on this research are George Georgiou, Jonathon McDaniel, and Scott Kerr, from the University of Texas at Austin’s Department of Chemical Engineering, Department of Molecular Biosciences and Institute for Cell and Molecular Biology; Jan Vinje, and Veronica Costantini, from the Centers for Disease Control and Prevention; and Peter Kwong, Anita Changela, and Raffaello Verardi, from the Vaccine Research Center at the National Institutes of Health’s National Institute of Allergy and Infectious Diseases.